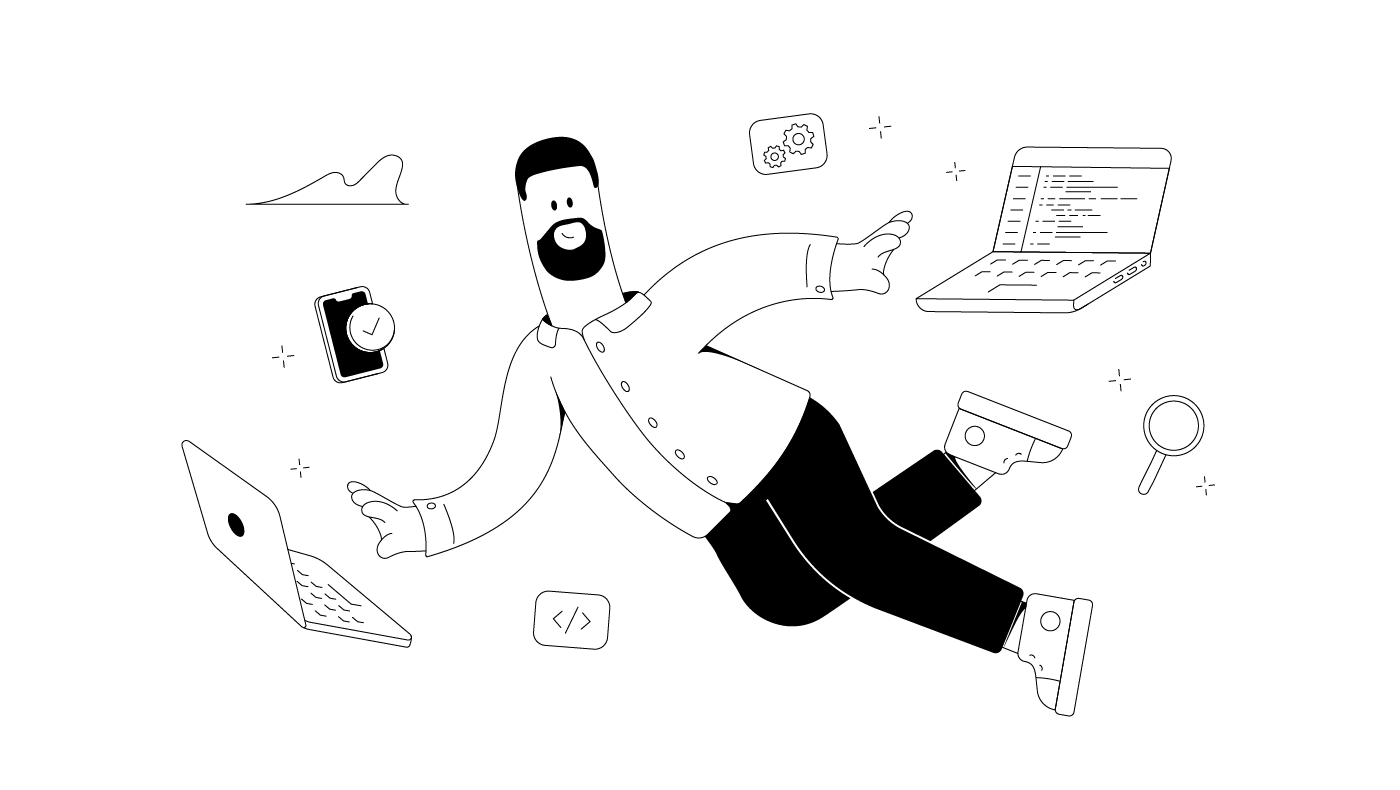 A Perfect Mix of Coding and Management

What’s an overwhelming role that combines software development skills with those of a project manager in a perfect mix? A lead software developer, of course! They are the true MVPs as they are seniors in handling systems and programs, provide information and answer questions, take on more responsibilities and provide helpful guidance to other developers.

To someone who isn’t familiar with it, all code looks the same. You may think software developers only differentiate between them by experience, but the reality is there are many branches in the programming industry, and excelling at one doesn’t necessarily mean you’re familiar with another!

Back-end developers are those who pull the strings behind the scene. Their main areas of expertise are troubleshooting problems and processes that you can’t see but that affect your user experience. Back-end developers focus on databases, back-end logic, application programming interface (APIs), architecture, and servers, so websites and apps work properly. To achieve this, they operate in languages such as Ruby, C++, Python, Scala, and Java.

Unlike their back-end counterparts who work on server-side software, front-end developers' role is focused on the user side. They’re the ones responsible for the interface of apps and websites, and they pay a lot of attention to user experience, which also includes optimizing the loading time. Front-end developers must follow industry trends and collaborate with designers. Their skillset includes working with JavaScript, CSS, ReactJS, and HTML.

When you combine the skills and knowledge of back-end and front-end developers, you get full-stack developers. They provide end-to-end service and are versatile in projects where the line between the interface and infrastructure is blurred. As a combination of these two roles, they must be familiar with all the languages back and front-end developers use but also be proficient in JavaScript frameworks such as Angular JS, React, and Amber.

New devices require new technology, and so with the development of the mobile phone industry, mobile app developers are in high demand. They must keep learning to win the constant battle of change in this industry. Building apps for Google’s Android platform, Apple’s iOS, and Microsoft’s Windows phones is their specialty. Mobile app developers use Java, Swift, Objective-C, Kotlin, C#, and other languages to create user-friendly systems and apps.

The gaming industry has exploded in the past decade, generating a record $191 billion in global sales in 2021. Video games keep evolving, and more developers are needed each year. They work closely with designers and often participate in the ideation of game concepts, storylines, and character development. Their tool palette for creating clean code and problem troubleshooting includes C++, C#, Java, JavaScript, Python, Swift, Lua, etc.

It’s important to maintain and evolve a company’s infrastructure so major issues don’t come to the surface and jeopardize systems and customer satisfaction. DevOps engineers help bridge the gaps between teams and make sure the entire system runs smoothly. They’re an integral part of a business as they also preserve compliance, which applies to all teams. DevOps engineers use automation tools such as Jenkins, Docker, Git, Apache Maven, and others.

The term “software developer” covers a vast field of job descriptions, different working knowledge, and levels of expertise. So, we compiled a list of a variety of titles in the development industry and information on their average yearly salaries in the US.

Becoming a Software Developer: Get Started

If you’re just finishing high school and trying to pick a career, a university degree in computer science or engineering could be a good choice. It will give you the necessary variety of knowledge and training to pick up any field in computer science quickly. You’ll also be able to change and adapt with more ease than those who only learned how to use one language.

But don’t let a lack of university degrees discourage you. Plenty of developers today have switched careers and successfully ventured into the software industry. There are many serious coding boot camps that will prepare you within a year for junior positions as developers. Some companies organize tech training and hire those who complete their programs. We’ve also selected a list of engineering courses to get you started.

No one expects you to learn all the code in the world to hire you. Not to mention that’s impossible! Even senior developers struggle for the first few months when switching products or companies because each is specific. So, as soon as you start learning various programming languages and frameworks, put them into use, build something of your own and collect the results in a portfolio. When the time comes to look for a job, you’ll already be a step ahead. Start sending out applications and prepare yourself for rejection and learning opportunities.

Every interview will most likely consist of an intro call, a technical interview, and a coding challenge. Try not to stress too much about the tasks a company gives you and the questions they ask because they’re meant to be difficult. The point is to see the way you think and how you manage solving needs in uncharted territory under pressure.

Many companies organize specialized courses in-house with the possibility to start working for them right after completion. These courses might be slightly more expensive than some online materials, but they could be a good starting point in your career.

Bear in mind that juniors aren’t expected to take on big chunks of work independently. Their success in the first year is mostly evaluated by their willingness to learn, find creative solutions, and adapt to collaborating with the team. Juniors get a mentor who reinforces their knowledge by passing it on.

A junior developer needs several years of intense work and learning to gain the necessary understanding of software development, start designing programs, and be appointed with more responsible tasks. With their level of seniority, the responsibility and range of required skills will grow. Senior software developers can become team leaders or lead developers and develop apps from concept to launch. They’ll also be expected to be in contact with clients and top management far more than their junior colleagues.

Day In The Life Of A Software Developer

Software developers, in general, don’t have a fixed time when to start or finish working, but they are expected to be available between certain hours each day so they can attend meetings and sync with the team.

Meetings— Almost all development teams work in sprints and the Scrum framework, which implies five mandatory types of meetings. Each morning, the daily standup allows the team to discuss which tasks were completed the previous day, what’s the plan for the upcoming day, and if there are any blockers. During the planning meeting, the team creates, with the help of a scrum master and product owner, a list of tasks they will deliver by the end of the sprint. Refinements are necessary for preparing items that will be the scope of the next sprint, and reviews are an opportunity to demonstrate what the team managed to deliver. Retrospectives wrap up the sprint by looking back and concluding what challenges the team faced and how they could improve their work in the future. All these meetings are hosted and moderated by the scrum master and must be attended by all team members.

Writing code— A software developer’s job is focused on turning the client’s ideas into apps, websites, and functioning software. They also try to ask many tech questions to gather as much information as possible from the client and reach an accurate description of their needs. No matter how experienced, developers will hit a wall sometimes and require assistance from the team when solving a problem. This is why dev teams work closely together and maintain contact with the community. Even when everyone works from home, they’ll keep in touch throughout the day via video calls or chats.

Testing and deploying— After coding and before shipping the newly made changes, a developer questions and tests their code to make sure it runs smoothly. They also rely on QA testers who report on bugs and discrepancies between what’s expected and what’s delivered. Developers must fix burning issues before continuing to write and deploy more code.

There are seven stages in the software development lifecycle. They include project planning, analysis, design, implementation of coding, testing, deployment, and maintenance. The different types of software developers we dissected earlier use different languages and tools, so we’ll try to group them by development phase.

Project planning is mostly a project manager’s or a PO’s job. Still, projects are usually organized and tracked through project management tools for developers such as ActiveCollab, Jira, Asana, Confluence, Basecamp, Teams, and similar apps that allow developers, managers, and clients to track progress and costs.

Analysis requires a decision process that defines which features will be included. For that purpose, whiteboards are very useful. In the remote world, online boards like Miro and Milanote are frequently used for brainstorming needs and creating concepts.

Design is a crucial stage because it turns ideas into concepts that need to be translated into code. Developers and designers exchange these concepts through platforms such as Figma and InVision.

Code implementation means translating from human to computer language. Software developers are the stars of this phase, and they employ tools like GitLab, GitHub, and Bitbucket for version control, Apache Maven for building, and Jenkins for continuous integration.

Testing can be automated and is mostly performed by software testers who use specialized tools. A good QA tester will excel at designing automated tests and finding the bugs some developers miss.

Today, companies opt for continuous deployment or delivery rather than manual releases. This ensures saving time and minimal downtime for users. Some tools that allow such a process are: RunDeck, Jenkins, CircleCI, Bamboo, GoCD, and GitHub Actions.

Before advertising a job opening, make sure you’re certain of who you’re looking to hire. If you’re taking on a new project, talk to your team first. They’ll know which skills are missing and who is necessary to complete the project successfully. Some developers might want to switch to different tasks, and the shuffle will cause a change in requirements.

Make sure to give juniors a chance whenever you can. Even though they’re just starting off, there’s a great possibility you’ll recruit an undiscovered gem. They’ll appreciate your belief in them and might stay in the company for years.

Remember to focus on the social skills of your candidates as well. Technical knowledge is crucial, but paired programming is very common, and team members must help each other out. If one of the developers stands out and doesn’t want to cooperate or communicate, you’ll have a lot of dissatisfaction to deal with.

Before you start interviewing candidates, create a comprehensive test to ensure whoever joins the team won’t fail at performing their tasks. The team working on the code will be the most qualified to compile technical challenges that will show a candidate’s competence.

Life in an Agency: Agency Roles and Responsibilities

When we talk about roles in an agency, we're actually discussing types of jobs. In a chaotic environment where clients are gods and deadlines are doomsdays, the lines between these jobs become blurred.